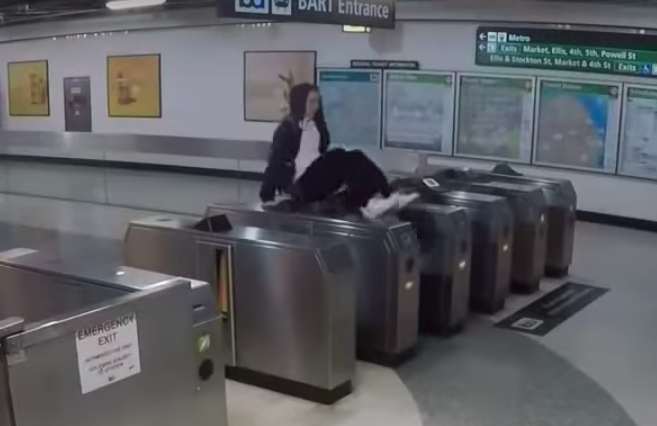 Revenues from fares form a large chunk of the total revenues of transit companies, next to other funding sources such as state or local taxes.

Losses from fare infractions amount to billions of euros yearly. In Europe alone, it is estimated that fraud in public transport is responsible for a loss of about 2.9bn every year.

To combat this issue, some transit companies employ frequent random ticket inspections. Others combine ticket inspections with fare gates at entry and exit points. These are reasonably effective methods but offenders often find ways to bypass them and escape undetected.

Typical fare infraction styles include jumping over turnstiles, tailgating (two persons entering at once), jumping over or ducking under the gates, or forcing the gates open.

Using video surveillance cameras, an AI system can be trained to monitor the crossings at gates in real-time, and alert instantly when someone tries to enter unlawfully.

Security agents can receive fare dodging alerts on their smartphones, allowing them to intervene swiftly and catch the offenders before they reach the platform.

In contrast to traditional mass inspections, selective controls carried directly on detected fare evaders offer a handful of benefits: no interruption of commuter flow, no bothering of paying passengers, inspections during peak-hours, and overall a safer, less risky approach to fare inspections in the context of Covid-19.

Making use of fare evasion statistics

Transport managers can use these insights for determining fraud rate at certain gates, stations, or areas, over specific time periods. This can be helpful to deploy agents at the critical spots, or when planning safety and security strategies.

Statistics are best used in combination with live alerts: draw insights from data to determine thresholds, and then set up custom live alerts when incidents happen.

Fare evasion does not have to be a burden on the financial sustainability of transport operators. Video intelligence can assist agents and transport managers attain situational awareness and take preventive and real-time action to stop fare infractions from happening.

Selective ticket inspections on identified fare evaders are especially helpful in the context of the pandemic, helping to maintain social distancing and reduce the need for close interpersonal contacts.

Fare evasion rates during the pandemic